You either walk around for a few days hunched over with neck pain, belt burn around your throat and one of your eyes partially obscured by blood from burst vessels- all the while grinning in oxygen deprived euphoria….OR…..someone finds your shit-sodden corpse hanging from a beam and they may or may not have the decency or state of mind to zip you back up or hose any incriminating DNA off of the floor before the coroner’s office arrives and gets their biggest laugh of the week. A lot can go wrong. A lot. Can go wrong.  In some cases, there is no such thing as TOO MUCH preparation or forethought.  And there is no shame in assigning a spotter to help insure everything ends safely and with the most rewarding results.  Autoerotic asphyxiation, strangulated masturbation, whatever you want to call it….truly parallels the creation of French macarons in its potential for embarrassing, irrecoverable tragedy, as well as the siren song of exquisite perfection…that highly prized yet painfully shy golden ticket that awaits you at the end of painstaking planning, artistry, and a little luck.  You’re either some idiot who killed himself jacking off, or you manage to take an otherwise overdone and underappreciated process and wring it dry by taking it to its fullest logical capacity.  There is a sense of dread involved with both…dread that is overshadowed by the promise of glory.  There is fear, the need for practice, and a Zen-like focus on the smallest details.  Lots of research and hopefully the ability to know when it’s time to cut your losses, back off completely, regroup, and save that victory for another day.  Your mind has to be right, and your mind has to stay right. If your mind isn’t right you are in grave danger.  Because failure can cost you a lot. It can cost you your fucking LIFE!  Or it can cost you at least twenty dollars in ingredients and an hour’s worth of prep.  Which of those two endings is scarier?? We would have to bring Plato back from the dead to ponder an actual answer to THAT question, my friend.  But I don’t think even he would know….we’re getting into uncharted philosophical territory….so I will just go about the task of education rather than force you to ponder the unanswerable…..

I was taught to make macarons by a professional pastry chef, and I have been making them for quite a while know….just shy of three weeks.  So I’ve learned a thing or two.  Mostly…the thing is, there is not one single thing you can do on-the-fly with these little bastards.  Call it mise en place, getting your shit together, whatever you want….you had better have every single thing prepped and measured ahead of time.  And get used to using the metric system, with baking that’s just the way it goes. If you hear me saying it, it really is true. There are some specific points at which you can blow the entire batch, and it isn’t like you can make some adjustment to save it…it’s not steak soup.

Here are the ingredients I use because they are what I used in class. I know there are about five hundred different recipes out there.  I have no clue about those. This is the only one I know. If you’re tempted to let me know a better way, don’t.  I don’t care. If you’re some purist who would be appalled that this recipe is somehow lacking or not authentic….there’s no way in hell you made it past the first paragraph because it sent you into flittering fits of aghastment, so I’m not too worried.  ON THE OTHER HAND, if you’ve got some great ideas for butter creams, curds, savory fillings, etc….THAT I’m interested in.  And don’t try sneaking in the information I’m not looking for when you share it.

Hardware- piping bag fitted with an 8mm tip, flat bottom sheet pans fitted with parchment paper (you HAVE to have parchment paper), and as far as all of the other shit…because I hope for your sake you’re not going to try and learn from ME on your maiden voyage or the hardest thing you’ve done are cupcakes…I’m going to leave it to you to figure out the rest; mixer, candy thermometer, good pan for cooking sugar, etc., etc…..

In case I didn’t mention this before- HAVE your SHIT ready to GO.  Everything pre-measured in its own little bowl, parchment cut, thermometer firmly attached to your pan which is already sitting on the stove, pastry bag fitted with a tip and sitting upended in a tall glass, mixer clean and ready, etc. If it can be done ahead of time, do it ahead of time. 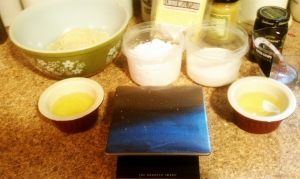 The first thing I do is just put one of the 75g batches of egg whites into the mixer and start the whisk on the lowest speed.  I also go and add the granulated sugar and water into my pan and leave the heat off.

Then, I go and whisk the powdered sugar thoroughly into the almond flour, to which I then add the other egg whites and mix until I’ve got a good, sticky dough.  This is one juncture where you could add food coloring (gel is preferred over liquid), but for the batch I’m featuring today I left coloring out completely due to a tragic attempt on Saturday that ended with the equivalent of the coroners taking Abu Ghraib-style photos next to my dead body.  The dough ended up being too runny…and it could have been ten different things that contributed to it, but you eliminate the most obvious one first…in this case, gel coloring due to the liquid it added into my macaronage.

This is where shit starts getting more touch and go…..basically, you want to get those egg whites in the mixer whipped to stiff peaks right at the same time your sugar mixture on the stove reaches softball stage.  I have not yet found the perfect timing to this, so I offer no finite advice on when to start what.  But this is the point where the belt starts to cut into your neck a little bit.  A spotter would not be the dumbest thing to have here.  You don’t want to overbeat the egg whites, and you need to have that sugar within a couple of degrees for this to go just right. BUT….long story short, when your egg whites are at a stiff peak, and the sugar is at soft-ball temperature, you take the hot sugar over to the mixture and slowly pour it down the side of the bowl into your whites…..and the mixer goes on high and stays on high.  Most of your weight is being supported by the belt right now, it is fully cinched and you’ve got a pretty long journey to joy and safety from here, so be mindful.

With the hot sugar introduced to the bowl, feel the bottom to see how hot it is. What you want to do is let it roll on high until it cools way down….8 or 10 minutes. At the end of that time you should have a pretty delicious looking Italian meringue.  It’s pretty strong stuff, so you don’t have to be a total pussy when folding it into the awaiting dough…to about 1/3 of it at a time and avoid getting any crystallized sugar in there from the sides of the mixer bowl. 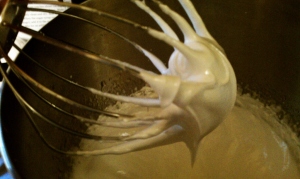 I think this whole process is best if it’s NOT done in a particularly warm kitchen….just thought I’d throw that in there.  So you mix your meringue into your dough until all streaks are gone, coloring is incorporated, etc…….now you’ve got “macaronage”.

From here, it goes into the pastry bag and you want the tip to be flush with the parchment paper and pointed straight down…..do about a five-count’s worth of piping….a little bigger than a quarter.  This was my first experience with piping anything, so you’re kind of on your own here. Once you’ve got all of your dough piped onto all of your sheet pans, be sure to bang them on the counter to make sure the tops flatten some and any big air bubbles work their way out.  Do not be shy about how hard you pound them on the counter….if your dough was done correctly it’s pretty sturdy. 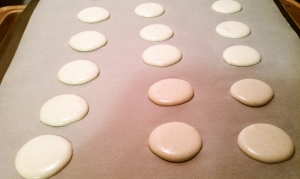 CRITICAL JUNCTURE-  the coroner’s office is waiting in the wings for this very moment- you have to let your dough sit out for at least thirty minutes.  The tops have to dry out some and get a skin built up so that when they bake, the skin forms the top crust and raises up to let the macaron’s “feet” fully form.  If you try bypassing this step, just go ahead and throw the batch away.  If after thirty minutes there isn’t a firmer, barely tacky top on your cookies, or if the dough has deflated and oozed into imperfect oblong shapes…throw them all out.  Of course, you can still cook them, they’ll taste good, you just won’t have macarons.

As your cookie dough is drying, start your oven and this is another thing you’ll have to experiment with…..but 310F is a safe place to start, so get it preheated.

When putting your baking sheets into the oven, DO NOT OVERLOAD IT.  You want plenty of circulation for evenness of cooking… half of this “successful” batch I did was ruined due to my impatience when I put too much into the oven at once.  Keep an eye on them, they’ll go for around ten to twelve minutes…..but the thing of it is, you want to see feet. If you don’t end up seeing feet, you’ve accidentally killed yourself somewhere along the way.  Feel the tops to see if they’re done enough for you….it’s kind of like pushing on an eggshell- if you see feet and it feels like the top will crackle under the weight of your finger, you’re probably good to go.

Of course, let them rest until completely cool and then run the thinnest spatula you have underneath to loosen them from the parchment.

I’m not going to explain any more from here.  If you can’t figure the shit out from here, you’re dumb. Make sandwich cookies….have fun with flavors.  I didn’t want to spend too much time on butter creams or homemade curds until I had my shit down pretty tight, so in order for my macarons to still sound LEGIT, I went and bought some authentic English (the fucking INVENTORS of strangulated beatin’ off) citrus curds with which to fill my cookies.  The sky is the limit though, go figure that shit out.

Oh yeah, don’t use that fucking edible pearlescent powder like I did because you feel insecure about naked non-colored macarons.  That shit is a nightmare.  You can’t get it all washed off of your hands and you walk around looking like a team of drag queens have been playing hot potato with your face.